In the smartphone industry, Motorola has a special position among all the manufactures. It was among one of the smartphones which evolved as one of the biggest brands in such a short period of time. Even if other phones are coming up with new features, customers are tending towards Motorola branded smartphones.

Moto has released its 7th generation Moto G smartphone in India in two variants The Moto G7 and Moto G7 Power after its Moto-E & Moto-G series smartphones. The smartphone Moto G7 Plus will be exclusively available in Amazon from March 2019, in Black and White color variants. 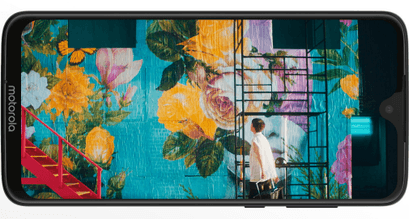 Both the smartphones Moto G7 & Moto G7 Plus are almost identical in terms of specifications, however there are some minor differences are there.

The smartphone runs on the Android 9.0 Pie operating system features a fingerprint sensor on the home button. Moto G7 Plus has Dual-SIM (Micro-SIM cards). It features 6.2-inch full HD (1080×1920 pixels) display with Corning Gorilla Glass 3 protection. The smartphone is powered by Qualcomm SDM636 Snapdragon 636 (14 nm) coupled with an Octa-core 1.8 GHz Kryo 260 CPU and in 4GB or 6GB variants.

The Moto G7 Plus bears a 16-megapixel rear camera with f/2.0 aperture, phase detection autofocus (PDAF), and laser autofocus, apart from a dual-LED color-balancing flash. It sports a 5-megapixel front-facing camera with an 84-degree wide field of view and f/2.2. As we’ve mentioned earlier, it will be sold in inbuilt storage options (64GB) that are expandable via microSD card (up to 128GB).

The smartphone supports 4G LTE, Bluetooth v4.1, Wi-Fi 802.11 a/b/g/n, Micro-USB, 3.5mm audio jack, and GPS/ A-GPS. The Moto G7 Plus weighs in at 155 grams, and measures 153×76.6×9.8mm, with its thinnest point being 7.9mm thick. It is powered by a 3000mAh battery that is rated to deliver up to 24 hours of mixed usage battery life. A Turbocharger is bundled with the Moto G7 Plus, and is said to provide 6 hours’ worth of charge in 15 minutes. Sensors on board include the accelerometer, ambient light sensor, and proximity sensor.

The Moto G7 sports the same specifications as the Moto G7 Plus, but features only 13-megapixel rear camera (with an f/2.2 aperture) instead of a 16-megapixel and the laser autofocus. It has no fingerprint sensor and only comes in 2GB RAM/ 16GB storage variant. Notably, both smartphones support 4G on one SIM card slot and 3G on the other.

The Moto which acquired by Lenovo is also offering a special feature called ‘dual-SIM with Intelligent calling’ on both of its smartphones which allows its users to assign contacts to a SIM card which results in enable of switching between the SIM cards for the particular person. Suppose if you’ve less call charges to offer to a specific number, you can assign that number to its corresponding SIM card.

So what are we waiting for! Head to amazon and get it for the best deal. It is exclusively available on Amazon store. Concluding this post on Moto G7 Plus specifications and review.