Skip to content
HomeINTERNETHow Much Does Bill Gates Make a Second?

How Much does Bill Gates make a Second, Minute, Day, Month and Year – Bill Gates is one of the richest person on this universe. He has been in the top of the list of wealthiest man in Forbes magazine. So here we will get to know about How much money does Bill Gates make in a second, minute, hour and day with all the calculations.

Before that let me introduce you few interesting facts about Bill Gates. Bill Gates is a co-founder of the largest PC software company, Microsoft. He held all the top positions like Chairman, CEO and Chief Software Architect in Microsoft. He was the largest individual share holder until 2014. Currently he is serving as Technical Adviser to present CEO of Microsoft Corporation, Satya Nadella. 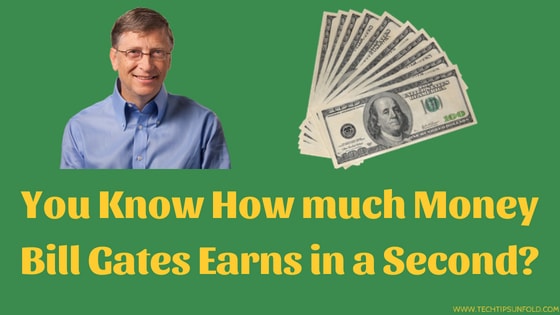 Gates has not born with Golden spoon. He started off with developing BASIC software for Altair computer to the world most popular PC software Brand, Microsfot. Over the period, Bill Gates net worth sky rocketed along with Microsoft’s stock prices. He became a billionaire at the age of 30. His net worth recorded whopping 100 billion dollars in the year of 1999 itself.

But after that he donated most of his shares to charities. Bill Gates gives away 64 million Microsoft shares of worth $4.6 billion in 2017 and also he donated whopping sum of $16 billions worth shares in the year 1999 and 2000. Now he has left with only 1.3% of stakes of Microsoft. If he continues to sell his stakes year by year, he will left with None by 2019 year end.

Here are few interesting facts about Bill Gates net worth –

Coming to How much Money Does Bill Gates make a second, there are different ways we can say this figure. One is to calculate this amount from the day he is born. That means from the second he born to till now, How much does Bill gates make a second. Here is the simple calculation.

These statistics were taken at the time of writing this article – August 15th, 2018.

How much Does Bill Gates make a second – $49.9 per Second

Till date, Bill Gates donated around $30 billion to charities and his Gates & Melinda Trust. If we add this amount also, then total amount he makes per second will be higher than $49.9 dollars.

Now lets take only last year net worth changes and calculate How much does Bill Gates make a second. Forbes is the magazine that publishes world’s richest persons list along with their net worth every year. So according to Forbes report, Bill gates had net worth of $86 billion in 2017 and current net worth is $96.3 billion.

So in this one year, he added amount of $10.3 billion to his net worth and also in this period he donated $4.6 billion to charity. So lets calculate How much does Bill Gates Make a Second both including and excluding this donation amount.

How much Does Bill Gates Make a Second, Minute, Hour, Day, Month and Year:

Yes, he earned $331 a second over the last one year period. and do remember we are yet to add the amount he donated to charities.

How much Does Bill Gates make a second – $331 per Second

On the other hand, Bill Gates has donated most of his shares to organizations and charities. Now he has left with only 1.3% of Microsoft’s shares. So it would be difficult for Bill Gates to gain the top spot again.

You can buy or equivalent to the following things with the amount of money Bill Gates has currently.

By the time I complete this article, $1436400 amount will be added to his net worth.

Related: How many people can Watch Hulu at once?

Donations given by Bill Gates:

As mentioned earlier, Bill Gates donated $30 billion amount to charities and his own Gates & Melinda foundation. Here is the list of big donations by Bill Gates.

Bill Gates also started ‘The Giving Pledge‘ along with Warren Buffet which aims at World’s richest person donating half of their total wealth for the welfare of the society. Till date, 183 billions have given pledge to donate the amount to use for noble cause.

Here is the short video about Bill Gates net worth and how much money does bill gates make a second:

Bill gates was the worlds richest man for a decade or so. He makes millions of dollars per day. Bill gates has been involved in many charities across the world to improve the health conditions of poor. Bill melinda gates foundation is operating in more than 100 countries serving the needful.

So I’m wrapping up this article on How much does Bill Gates make a second, minute, hour and day. Feel free to add if you know any interesting facts about this topic.